Going west, a step back in time.

Literally, and not because I think the towns here are stuck in the past, not at all.
What I mean is that, about 10 years ago, I started researching the Australian history of my husband’s family, the Durands. I searched and compiled and wondered about these Central NSW towns that were mentioned – Walgett, Trangie, Coonamble.  Ten years ago, I couldn’t envisage a scenario where I would be able to visit any of them, being so far away from our home in Kogarah, Sydney.

I marvelled at the spirit of the patriarch of the Durand family, Joseph Vincent, who farmed vegetables in Walgett, married, had sons. There was mention of the Durands who went to war, ironically in France. While I wasn’t entirely certain of the connection to my husband’s direct ancestor, they had to be connected somehow, right? I mean, how many unrelated Durands could there be in one small town?? Anyway, life got busy, we moved to Lake Macquarie and I put the family history aside.

Fast forward to March 2017, and I’ve booked a pop up stall at Broken Hill. Why? Because I haven’t been there before and I’d like to try it! I look on the map and receive a shock about how far away it is, man, I had better stay somewhere overnight. So, I am working out a halfway point, which is…… Trangie. And something pings from my memory. Isn’t that where some of Ric’s family lived 100 years ago?

I set out at an ungodly hour (read in Howard’s mother’s voice from Big Bang Theory) and determined that I wouldn’t dawdle my way along, as I usually do. To help, I put on a cd recording of a Robert Ludlam story. It’s been long enough since I last listened to it that I find it entertaining. 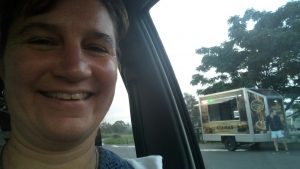 Heading west along the Hunter Expressway, and then turning onto the Golden Hwy, I pick up a coffee from a coffee van in the rest area – hallelujah, somebody has finally done it!!

Now I am starting to drive through areas where the fires ripped through last month.  All the way from Denman to Merriwa there are large areas of burnt out country. Yet, signs of life abound with the leaves growing out of blackened tree trunks and tufts of grass emerging to cover the bare soil.  Bushfire is like a Brazillian wax – it exposes everything! Tree roots and boulders which were once covered in debris of leaves and twigs are looking bare (and tidy lol).

So as today’s drive went according to plan (and I didn’t lock my keys in the car during a pee stop!), I arrive in Trangie just after 2pm.  Which is amazing because I usually arrive anywhere after dark!
In my room, I do a quick Google search for ‘Durand in Trangie’ and the results bring up entries for ‘Silk growing in Australian’, the move ‘from Walgett to Trangie’ and National Library of Australia entries for a number of Durands who enlisted for service in WW1.
So, I decide to go for a walk to stretch out my legs and eyes. The street is so quiet, and even the publican points out how quiet it is for a Friday afternoon. I find the Services Club and there is a memorial for WW2, but that’s is too late for me, but feel I am in the right place. Where else can I look?
I looked down and found a feather – white, grey, and black, with a piece missing. Just like my family history story, there’s concrete facts and lots of grey areas, even missing information. I picked it up as a talisman and kept walking.

There’s a building that looks just like all the Masonic Halls, but no, this one is way better: it’s the Soldiers’ Trangie Memorial. A white imposing building with two Honour Rolls on the front wall.  I move towards the WW1 roll and look closely! There are two Durand soldiers remembered there – DD & LN!

Excitedly, I look up the entries again and am able to put flesh on these bones:

Anyway, it’s been a big day and it is dinner time now!! I wonder what tomorrow will bring.
Incidentally, while I was driving today, I was keeping track of my kms and I realised that even though I had done the calculations on the net about the best ‘halfway’ place to stop for the night, it seems that I am not really halfway at all, I have a longer drive tomorrow.  But I think I was meant to stop here tonight. Don’t you?

To the edge of the Outback

2 thoughts on “Going west, a step back in time.”

well done you. what an exciting journey

Thanks Fiona! It is!